UniFrance releases its Summary of 2012 for French cinema abroad

The complete Summary of 2012 may be accessed by clicking on the attached document.

In it you will find an analysis of the performances achieved by French films in more than 50 territories (for theatrical releases), and 17 European territories (for television), along with sales results for French short films (€500,000 in revenues).

2012 will go down as a bumper year for French cinema, for the distribution of our films throughout the world achieved a genuine state of grace. Besides the extraordinary results registered by the year's outstanding trio Taken 2, The Intouchables, and The Artist, which themselves alone attracted more than 60% of the year's total admissions, a large number of French films enjoyed wide distribution in cinemas around the world and proved popular with audiences. A Monster in Paris charmed British spectators; What's in a Name did likewise in Italy and Israel. Delicacy and Captial intrigued the Spanish, while Les Neiges du Kilimandjaro seduced the Scandinavian countries. Farewell, My Queen enraptured Americans and Derrière les murs made Chinese audiences shiver. Amour and All Together have the distinction of both registering very fine performances in Germany (which has Europe's oldest population, with an average age of 42) and in Brazil (where the average age is 28). Each major territorial zone boasted record admissions, in Asia and North America alike, in the Near and Middle East, and in Central and Eastern Europe. French films attained a 2.95% market share of theatrical admissions throughout the world, and 4.86% of revenues.

With regard to results for the sales of French short films, the 2012 annual study allows us to note an increase of 2.4% in overseas revenues and of 3.5% in the number of sales compared with 2011. French exports resist despite the great difficulties faced by the major TV buyers in Europe. 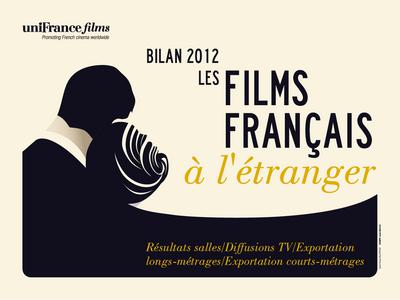