The director and lead actor of Superchondriac has embarked on a mini-tour of Israel to introduce his latest film in the lead-up to its commercial release.

For the past few days, Dany Boon has been in イスラエル to promote the upcoming release of Superchondriac. The film is set for release on Israeli screens on December 25, distributed by Eden Cinema (Caroline Boneh), the same company that handled the successful release of Welcome to the Land of Ch'tis.

Superchondriac will be released on 15 prints, which is a high number for a French film in this market. Dany Boon presented his film in a preview screening in Haifa (in the presence of the mayor of the city and the French Consul, with support from UniFrance Films), as well as in Tel Aviv and Jerusalem. The screenings, which were followed by Q & A sessions with audiences, were extremely well received by local Israeli moviegoers as well as the French speakers present, and generated positive media coverage.

During his visit to Israel, the actor-director also met with the Israeli actresses Ronit Elkabetz and Keren Mor. 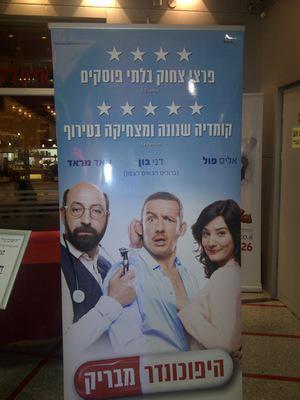