Short Film of the Month: October 2016

This month, we present Rhizome by Boris Labbé, as our Short Film of the Month.

With around 200 productions winning awards at foreign film festivals each year, French short films often attract the lion's share of attention at international events. Whether they are documentaries, animated films, experimental productions, or dramas, all genres regularly pick up prizes.

Placed in the spotlight at the recent Annecy International Animation Film Festival, French animated productions have broken all the records in the past few years. In 2015, animated films accounted for one half of all sales of short films and almost one third of the annual turnover of the short film sector in France. Two French shorts that were highly popular at international film festivals won Oscars in recent years: Logorama (2010) and Mr Hublot (2014). The French animation sector stands out by the great diversity of techniques utilized (3D, stereoscopic processes, stop motion, puppetry, and so on) and the strikingly rich palette of themes explored (ecology, sexuality, death, sci-fi, etc.).

Rhizome, which we are presenting this month, is a perfect example of all this. 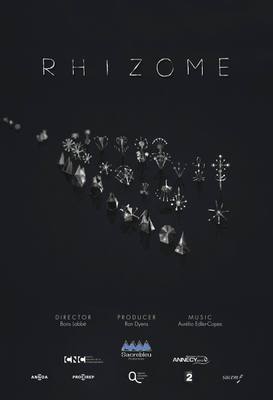 Directed by Boris Labbé, this film offers viewers a highly personal interpretation of a philosophical theory developed by Gilles Deleuze and Félix Guattari. Without using words, it exerts a visual fascination of its own that progresses from the infinitely small to the infinitely large. Forging an unexpected alliance between computer science and art, Rhizome demonstrates that cinema can also venture into the realm of philosophy.

Rhizome has achieved a triumphant run outside France, having been selected at over 35 international film festivals, including festivals in メキシコ, the アメリカ合衆国, 日本, South Korea, ロシア, ポルトガル, and アルゼンチン. Recently awarded the prestigious Ars Electronica Prize in オーストリア, this prize adds to its collection of six other awards to date.

The debut film by a graduate from the EMCA - École des Métiers du Cinéma d'Animation, this short film bears witness to the high standard of filmmaking offered at French animation schools, which have earned a reputation that reaches far beyond our borders.

With thanks to Sacrebleu Productions