Etienne Comar, Reda Kateb, Rebecca Zlotowski, Bertrand Bonello, and Emmanuelle Bercot in Greenwich Street at the end of a lunch organized to introduce them to American media representatives.

They showed a certain serenity when dealing with their highly enthusiastic welcome from New York audiences and took pleasure in strolling through the streets of the city (unusually frosty for early March) between film screenings, presentations, debates, and interviews. Reda Kateb and Etienne Comar were to return to Paris the same evening, while Emmanuelle Bercot had to be on stage at the Walter Reade Theater one hour later to present 150 Milligrams. Bertrand Bonello had only just arrived and was gearing up for the debate on "Cinema and Politics", and Rebecca Zlotowski was about to change hemispheres, with her flight to Australia scheduled a few hours later. She will take part in the Alliance Française French Film Festival, traveling to Australia's major cities with her film Planetarium. 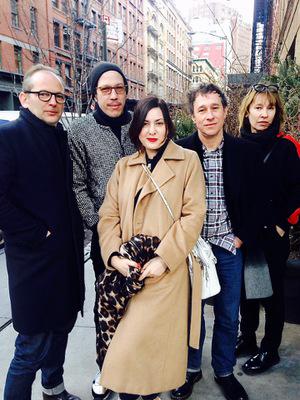