Antoine Blossier's film Remi, Nobody's Boy will hit movie screens in 中国 on Friday, November 22, with 10,748 prints to be released: an all-time record for a French-language film in China. 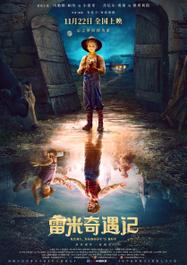 For the film's Chinese debut on Friday, November 22, its distributor China Film Group is thinking big and betting big despite fierce competition from the launch of Frozen 2 on the same day: 10,748 sites will screen Remi, Nobody's Boy by Antoine Blossier in 352 cities, thus making it the widest release to date of a French-language film in 中国, with only the English- and French-language Valerian and the City of a Thousand Planets surpassing it (13,000 prints released). Up to now, the French films that have been offered the widest release in China are Christmas & Co. (8,000 print), Leap (6,600), and Taxi 5 (6,000). Blossier's film has been dubbed in Mandarin by professional actors from the China Film Group.

The film's media campaign equally ambitious, with 3,000 ads on billboards located on high-rise buildings in the major regional cities.

Remi, Nobody's Boy, whose international sales are handled by TF1 Studio, was selected at two Chinese film festivals—the Silk Road Film Festival, where it was screened in the presence of the director and lead actors Maleaume Paquin and Virginie Ledoyen (photo) and was highly acclaimed, ensuring a promising start to its reception in the country; and the French Film Panorama in China organized by Unifrance. The novel by Hector Malot on which the film is based is very well known in China and was included in the school curriculum until 1994. The Japanese cartoon of the story, which was produced in the late 1970s, is also highly popular in China.

Remi, Nobody's Boy has already registered around 200,000 spectators outside France, with particularly successful results in Peru (27,331 admissions) and Vietnam (22,247).

Valerian and the City of a Thousand Planets