German media showers praise on the film by Philippe Lioret.

"A French film like a song: in tune, moving, and melancholy." Freundin (March 14, 2007)
"Beautiful enough to make you cry," "A subtle psychological thriller," "A journey of great emotional strength, a melancholy masterpiece," "A moving family drama," "A thriller with a poetic edge", "At once volcanic and peaceful."
The German media is full of enthusiasm for Je vais bien, ne t’en fais pas by Philippe Lioret, released March 22 by Prokino. Mélanie Laurent has been widely praised for her powerful and controlled performance (the actress recently won a Cesar award for Most Promising Actress): "…the young actress carries the film, and charms us throughout,” “captivating,” “impressive as a sad young girl,” "a breathtaking actress,” and “quite simply magnificent.”

These latest accolades add to the fine reputation that the film has already earned in France and all the other countries in which it has been screened or released (Canada, USA, Japan, Greece, Switzerland, and Belgium). 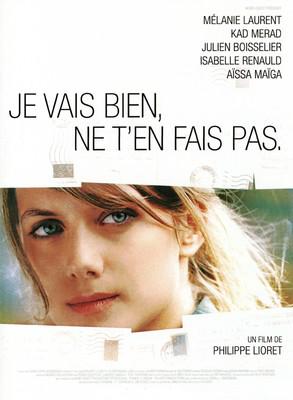