Stéphane Brizé reports on his trip to China

Stéphane Brizé, a member of the French delegation attending the 7th French Film Panorama in China in April, shares his impressions with us.

Of course I will never forget our arrival in the lobby of the Canton Hotel, the size of a football field, nor will I forget the central train station in this city, whose scale rivals an airport. Of course I will remember Wuhan, a vast and inhuman city divided between black and white buildings and neighborhoods swallowed by colossal construction sites, where Mao Tse-tung would come to relax and count the dead, and where we were welcomed at a charming hotel. I will, of course, remember Beijing airport, which makes our Parisian airports seem like suburban train stations. I'll remember the gigantic scale of the never-ending Chinese capital and its five beltways. I won't forget a discussion I had with a cinema manager in China, who espoused a surprising and frightening synthesis of communism and capitalism, with little desire to offer significant screen time to auteur films in their brand new theaters. Then there was the unforgettable opening ceremony of the French Film Panorama that became a celebrity event, backed up by Chinese starlets, which was broadcast on the small screen to tens of millions of spectators who watched us singing "Happy Birthday" to Josiane Balasko. Unforgettable too was the Iceland volcano, which had us stranded for five days in Shanghai and allowed us to prolong our precious ties of genuine friendship between delegation members.
But perhaps an even stronger memory will be the two hours spent at the Beijing Film Academy with Zhang Ke Jia, during which we spoke with two film students. This was one of those rare moments spent in the company of an extraordinarily talented filmmaker, who analyses in each of his films the bonds between men and women in a Chinese society that has the appetite of an ogre. He is a film director who enabled me to understand what my eyes were seeing, in other words, a director of essential importance. 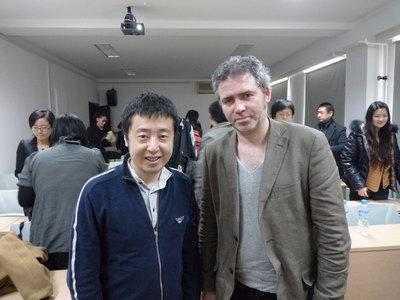