In order to strengthen a partnership that has proved highly successful over the years, Unifrance will once again join forces with the Film Society of Lincoln Center to co-present a new annual program called "Spotlight." This event will take place at the Walter Reade Theater, and will present a retrospective of contemporary films starring French actors or directed by French directors. It will allow New York audiences to discover numerous film works, some of which have not been released in the American territory.

The first edition will focus on the career of actress Nathalie Baye. She will be present from October 15 through 17 to introduce the films and talk with the public after the screenings. A session entitled "A Conversation with," during which the actress will reflect upon her career during a conversation illustrated with clips from her films, is also planned on October 15.

In the words of Richard Peña, Film at Lincoln Center Program Director: "Her entire career, Nathalie Baye, has been at the cutting edge of French Cinema, working with the most notable of directors as well as emerging talents, such as Xavier Beauvois, with whom she won a Cesar for best actress in his Le Petit Lieutenant. We are delighted to begin our Spotlight series, which we hope will become our second successful annual series with Unifrance, alongside Rendezvous, with this tribute and personal appearance by a most extraordinary actress."

From October 15 through 21, New York spectators will hence discover or rediscover a retrospective of 12 films: Catch Me If You Can. The Green Room, Cliente, Detective, The Flower of Evil, The Mouth Agape (La Gueule ouverte), Michou d'Auber, Notre Histoire, Le Petit Lieutenant, The Return of Martin Guerre, An Affair of Love, and Venus Beauty Institute. 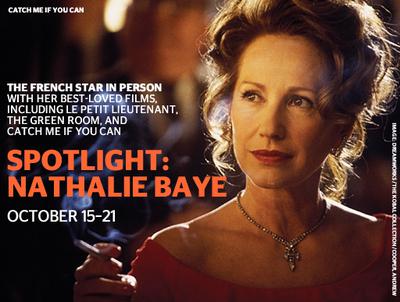