The CNC celebrates the launch of the Franco-Russian Film Academy, which took place in Saint Petersburg July 11, 2011.

The CNC is pleased to announce the launch of the Franco-Russian Film Academy, which was held in Saint Petersburg July 11 in the presence of its honorary president Carole Bouquet; its president, the Russian director Pavel Lounguine; and its signatories, the president of France's National Center of Cinematography and the Moving Image (CNC), Eric Garandeau; the general director of Russia's Federal Film Fund, Serguei Tolstikov; the head of the film department at the Russian Culture Ministry, Viacheslav Telnov; Unifrance president, Antoine de Clermont-Tonnerre; along with representatives from the French Ministry of Foreign and European Affairs and the French Institute.

Thanks to this new cooperation tool, France and Russia are entering a new era of cinematic collaboration. France and Russia share a strong and longstanding working relationship that dates back to the invention of cinema by the Lumière brothers in 1895 and was cemented in a co-production agreement signed as early as 1967.

The goal of the Franco-Russian Film Academy is to boost renewed artistic collaboration between these two great cinematic nations and to foster the development of films that are emblematic of both cultures in creative and production aspects of the film sector.

The Academy will promote the building of contacts between professionals from both countries and will implement joint initiatives. Its activities will focus on training in film industry professions, preserving and promoting cinematic heritage, supporting the creation and production of films, as well as distribution and international cooperation.

The Academy's work will be structured around a highly dynamic schedule of cultural exchange between the two countries, such as the upcoming Honfleur Russian Film Festival to be held in November this year and the Russian Film Week to be organized for the first time in January 2012 at the Forum des Images in Paris.

The CNC encourages all French movie professionals, be they actors, directors, producers, distributors, or technicians, who are interested in being involved in the Franco-Russian Film Academy to join its founding members by sending an application specifying their reasons to the CNC's Direction of European and International Affairs.

Click here to view the press release from the launch of the Franco-Russian Film Academy July 11 in Saint Petersburg:
http://tinyurl.com/6f89jsk

Read the text of Eric Garandeau's statement at the launch of the Franco-Russian Film Academy:
http://tinyurl.com/3gnako9

View the bylaws of the Franco-Russian Film Academy:
http://tinyurl.com/3upku7m 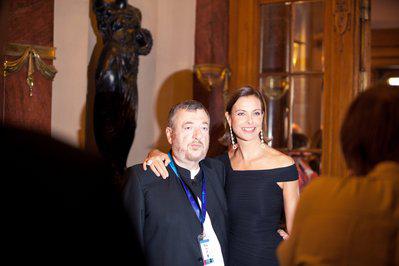