The Artist sets out to conquer the USA

Honored with the Hollywood Spotlight Award in Los Angeles yesterday evening, The Artist enjoys continued international success in the lead-up to the Academy Awards.

Step by step, award by award, The Artist is making a name for itself in the United States.

After receiving the Audience Award at the Hamptons International Film Festival and the Chicago International Film Festival - 2011, the film was honored yesterday evening at the Hollywood Film Awards.
Jean Dujardin and Bérénice Bejo received the "Hollywood Spotlight Award", while Michel Hazanavicius was voted Hollywood Breakthrough Director. This offers a boost for French cinema and highlights the emergence this year of highly talented artists (such as the French actors sharing the category with  Elle Fanning for her performance in Super 8). These awards represent steps on the path toward the ultimate goal, the Academy Awards.

The The Weinstein Company continues its promotional support for this "little French film" that has the potential to compete with high-caliber Hollywood productions at the 84th Academy Awards ceremony to be held February 26, 2012.

But in the lead-up to this event, must pass the test of its US release, scheduled for November 23, in order to gain audience approval, perhaps an even more influential key to success. 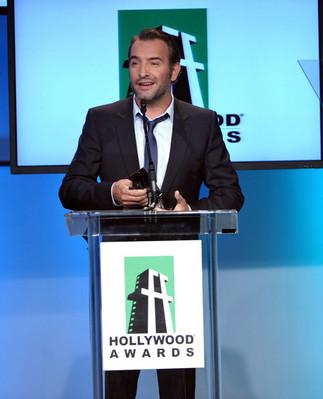