Released February 24 by Medusa The Intouchables has topped the box office in Italy. With 300 prints in circulation, it has already clocked up 226,468 admissions and close to €1.5 million.

After making its mark as one of the most successful French films this decade in French-speaking European markets (with over 1 million admissions in スイス and 890,000 in ベルギー), The Intouchables continues its brilliant career, now sitting at the top of the German box office. After six weeks in theaters, it ranks as the most popular French-language film in more than thirty years, with 5.5 million spectators to its credit.

Untouchable's recent Italian launch demonstrates that its success on German screens is no exception, with the film clearly set for an impressive international career. It is due for release in Spain on March 9.

The Intouchables currently boasts a running total of 8.2 million admissions outside France. 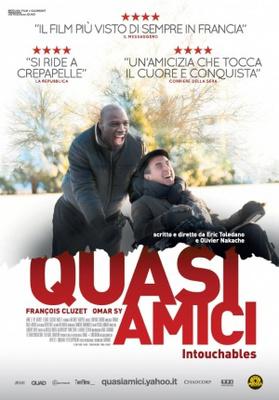