Find the 20 French films abroad, June 29 to July 5 juillet, with

The Intouchables pursues its career in the United States (The Weinstein Company), where it shows great stability with $556,000 supplementary admissions garnered (+7% compared with last week), equalling 71,000 tickets sold. The film has already attracted 362,000 spectators, making it the top performance achieved by a French film released in the United States in 2012. This is yet another significant performance in The Intouchables international career, which has now accumulated more than 21 million admissions abroad.

2 Days in New York has got off to a rather disappointing start in Germany (Senator), with 23,000 admissions registered on 91 prints. This result contrasts with the 280,000 admissions generated by Two Days in Paris (3L) in 2007. We note a similarly disappointing result in Austria (Constantin Film): 2 Days has drawn in 2500 spectators on 23 prints.

This follow-up is clearly struggling to impose itself in foreign markets, as its British (Network Releasing – 35,000 admissions in eight weeks) and Belgian (Paradiso Entertainment – 16,000 admissions in nine weeks) results testify. Nevertheless, it may get a boost from its release in the United States, where Two Days in Paris (Samuel Goldwyn Films) achieved its best international results with 671,000 admissions. 2 Days in New York is scheduled for release theatrically and on VOD in August (Magnolia). A success across the Atlantic could provide a lever for the many other territories where the film has been sold.

Un bonheur n’arrive jamais seul has gathered 20,000 spectators during its second week on Belgian screens (Alternative Films), with no change to the initial 33-print release. These two first weeks of the film's run (37,000 admissions) suggest a career comparable to The Brice Man (Victory), the precedent success of director James Huth in this territory, where the film ran for 18 weeks and totaled 150,000 admissions.

Cosmopolis has achieved an average performance in its first week in German theaters (24 Bilder Filmagentur). Despite being distributed on 99 prints, only 16,000 admissions have been registered. An identical situation has been noted in Austria (Einhom Film), where its 25-print release has garnered 3000 spectators. However, in the United Kingdom (E1 Entertainment – 53,000 admissions), Italy (01 Distribution – 134,000 admissions), and Portugal (Medeia – 28,000 admissions), it has clocked up the fifth top performance of a French film since the beginning of 2012, with 272,000 admissions throughout the world. 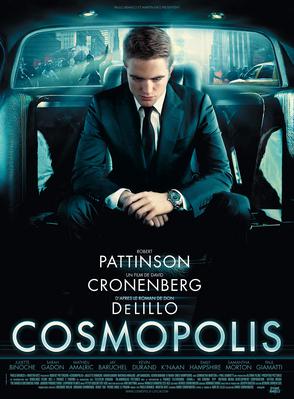