The Girl From Nowhere by Jean-Claude Brisseau received the Golden Leopard, the top honor, at the Locarno Film Festival,

The official jury of the 65th Locarno Film Festival, chaired by Thai filmmaker Apichatpong Weerasethakul, surprised forecasters because Jean-Claude Brisseau is the doyen of a competition intended to showcase new talents and because the protagonist of this delicate production, shot on DV, is the filmmaker himself.

Among the French films, we also note Camille Rewinds by Noémie Lvovsky, which received the Variety Piazza Grande Award.

For Locarno president, Marco Solari, "the end of a festival is already the begininng of the next." Next year's priorities will be centered around "strengthening the international profile of the festival, as well as supporting the city of Locarno's efforts in the realization of the Palazzo del Cinema, with the aim of making it a state-of-the-art audiovisual centre."

The 66th edition of the Locarno Film Festival will take place August 7 through 17, 2013. 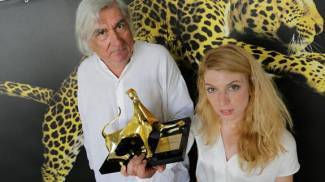 The Girl from Nowhere