Report on the 2nd Rendezvous with French Cinema in Singapore

UniFrance Films and the French Embassy in Singapore hosted their second annual event dedicated to French films in Singapore.

This event comprises a French Film Festival and the Asia Television Forum & Market (ATF), which is aimed at Singapore, Malaysia, Indonesia, Thailand, the Philippines, and India, and included 10 sales companies this year. Originally directed to the television industry, this market extended its reach to film product two years ago thanks to its partnership with the Rendezvous with French Cinema in Singapore, and now invites the attendance of around 30 Asian buyers selected by uniFrance Films. It provides an opportunity for French sales agents and Asian buyers - some of whom do not attend the AFM or the Berlin Film Festival - to meet in an atmosphere that is more relaxed than at the major markets, and to take part in in-depth discussions. For the first time this year, it was possible to invite two Burmese distributors to the event, allowing them to meet with French sales agents.

The festival was founded with the aim of stimulating the commercial distribution of French films in this region, with an emphasis placed on promotion. The line-up features around twelve films, including both titles which have been acquired by local distributors and those which have yet to secure a buyer.
This second edition met with considerable success thanks to the presence of French actors and directors and large audiences at screenings held in the theaters at the Cathay Cineplex and the Alliance Française.

A press conference focusing on Sophie Marceau, who hosted the festival's opening ceremony with a screening of Happiness Never Comes Alone, attracted around sixty journalists from all over Asia. Isabelle Huppert's presence at the event helped throw the spotlight on the film Love by Michael Haneke and to draw Singaporean audiences with a taste for auteur films.

Jean-Christophe Dessaint, director of 森に生きる少年～カラスの日～, hosted three meetings with animation students. Pierre Jolivet and Marc-Antoine Robert, the producer of his film Armed Hands, led a master class for film students at the Tisch School of the Arts Asia, while Anne Fassio, Fleur-Lise Heuet, and Antoine Roch (Ma bonne étoile) paid a visit to the School of Film & Media Studies at the Ngee Ann Polytechnic. 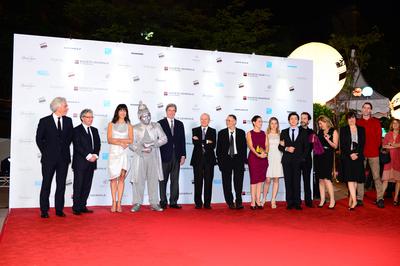