A harshly sensual world in the fiery inferno of Hell. Big-breasted tailed demoness & demons whose tails are phalluses strut, rut, reproduce, nurse, & generally show off amindst the flames. An angelic prostitute confronts God. All voices, male or female, are done by Yves Robert in his own voice, which has a disturbing effect all its own. 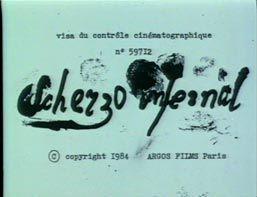