Pierre, a middle-aged tourist guide, collapses suddenly. He has no idea where he is. He returns home and finds Antoine, a mysterious young man whom he doesn't know, waiting for him to exact revenge a woman whom he apparently loved who has hung herself. What exactly is Pierre's degree of responsability in this matter ? In a night-club where they go together, Pierre meets Ninon who, according to Antoine, dances like the woman who committed suicide. Suddenly, he remembers an elegant and very beautiful woman whom he met when travelling about the country to sell the Encyclopaedia Briannica. He remembers that he desired her. This woman, during their conversation, made a confession to him : she was passionately in love with a young man aged 11, her husband's son...

"Surprising and incongruous (...) Fado, majeur et mineur is a comical film. Its humour springs from various sources. Indeed, the unexpected can often unleash laughter, since the plotline unfolds like a sort of cinematic game in which Ruiz regularly surprises the audience with unforeseen twists, presented with logical self-evidence. (...) The whole thing is carried off by a cast and a direction of actors that only serves to intensify the situation comedy. Fado, majeur et mineur confirms that Ruiz remains one of today's few representatives of a genuinely surrealistic cinema."
(Jean-François Rauger - "Le Monde") 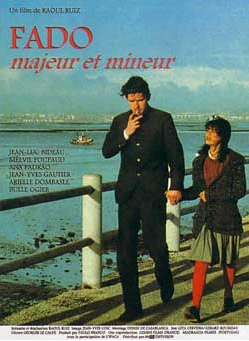